With 60% of millennials identifying as ‘belief-driven buyers’ globally, Nike knew the rewards for supporting a political issue would outweigh the risks. They took the opportunity to capitalise on the behaviours and brand expectation of their core demographic – young, urban liberals with diverse views and social values – and it paid off. Smart brands know when to engage, not if they should – and knowing your audience inside out is key to that success. 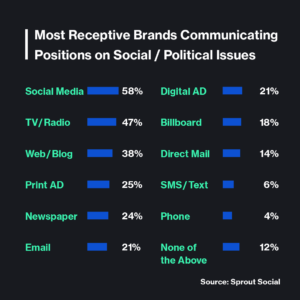 According to Sprout Social, 61% of people think it’s important for brands to take stands on political or social issues. What’s more, social media has been identified as the primary channel to communicate these values, topping the likes of TV, blogs and print advertising. The most relevant and meaningful moments of engagement will drive wider consumer receptivity and ultimately result in brand loyalty.